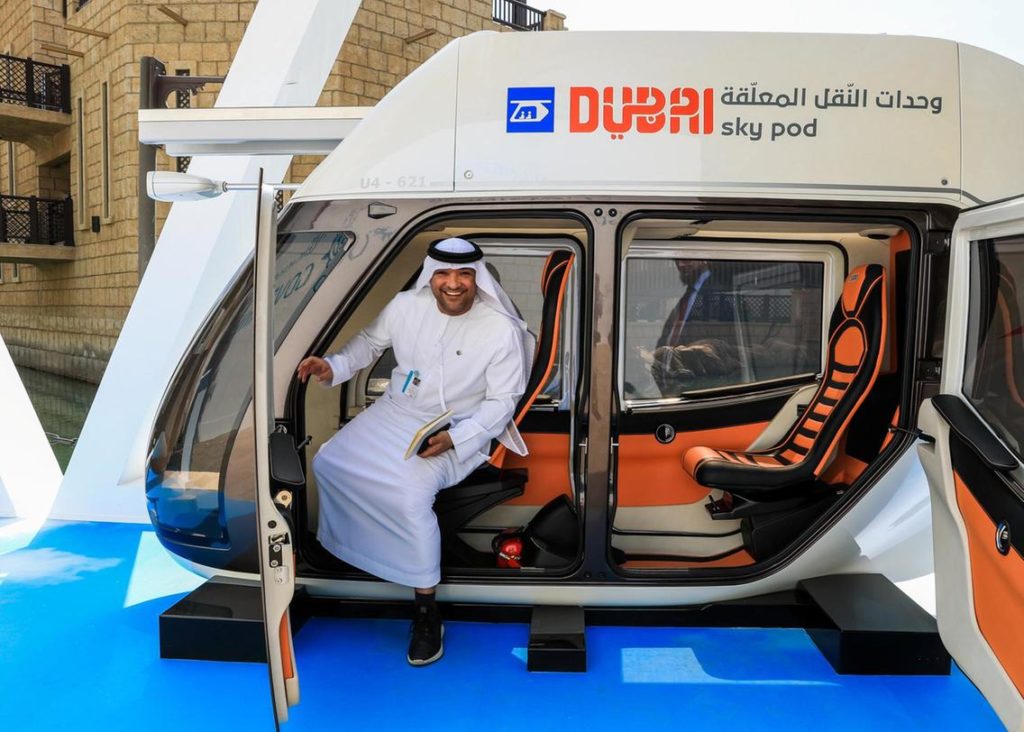 Imagine if you could get between Dubai and Abu Dhabi in 15 minutes, bypassing the traffic on Sheikh Zayed Road, while using five times less energy than an electric car.

That is what a proposed new system of cable car-like Sky Pods promises to do and Belarusian designer Anatoly Yunitskiy believes it could become a global phenomenon with Dubai in the lead.

The vehicles, invented by Mr Yunitskiy’s company #Skyway and displayed at the World Government Summit in Dubai yesterday, would move high above the ground along a specially designed network of overpasses. One model, the high-speed #Unibus, can carry 24 passengers at speeds of up to 500 kilometres per hour.

Another smaller model – which the Ruler of Dubai visited on Monday – travels at about 150kph.

Other models on show included the #Unibike, which can be manually propelled along suspended rails.

Mr Yunitskiy believes the pods, which are all fitted with leather seats and large windows, will revolutionise the way we travel around the UAE.

“We are creating the most eco-friendly, comfortable, cost-efficient and productive transport system ever,” he said.

The system would also use up to 100 times less land than traditional transport infrastructure.The entrepreneur, who claims to “have been thinking about transport” since he was five years old, said that the company is working on commercial projects. “It could be that Dubai is first,” he said.The Edge of Government exhibition challenges visitors to “think in new and often counter-intuitive ways about how to solve the most pressing public challenges of our time”.Visitors were also given a peek inside a model of the Museum of the Future, which is scheduled to open near Emirates Towers next year.One of the more eye-catching exhibits shows new healthcare concepts that could shape how emergency care is delivered in the future.A robot transporter could arrive at the scene of an accident to make an analysis of a trauma victim’s health, while nanobots could then repair damaged tissue. In critical cases, the technology could keep a patient alive long enough for human help to arrive.Another concept on show is the mind gateway – technology that could temporarily transfer human consciousness to a robotic shell.Although realising this remains decades away, the scientists behind the idea claim it could help remove the need for humans to put themselves in harm’s way in areas such as deep sea exploration. It could also potentially offer mobility to the physically disabled.Virtual reality continues to open up new avenues to explore, particularly in filmmaking, and two short VR films by the New Reality Company are being shown at WGS.The first, called Giant, allows the viewer to experience the onset of war first-hand through the eyes of a family whose house is being bombed.Tree puts the viewer in the unusual position of seeing the world as a tree might. With branches instead of arms, you grow above the forest canopy, seeing plants and animals from a new angle. It is beautiful and disorientating. There is a sting in the tail, though – a man-made forest fire is an urgent reminder that when we destroy nature, we damage ourselves.